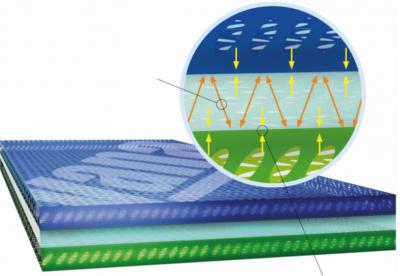 Adhesive tapes have become widely established as bonding agents for use in sealing modern constructions, just as nails and screws are the standard solution for timber structures. Adhesive tapes can be used in the creation of airtight building envelopes where several hundred metres of tape are often used on a single building!

Tapes have to fulfil their functions for a number of decades to ensure that the building in question fulfils the standards expected by the designers and ultimately by the building client. This article provides an overview of adhesive technology and the key properties of adhesive tapes typically used in construction. 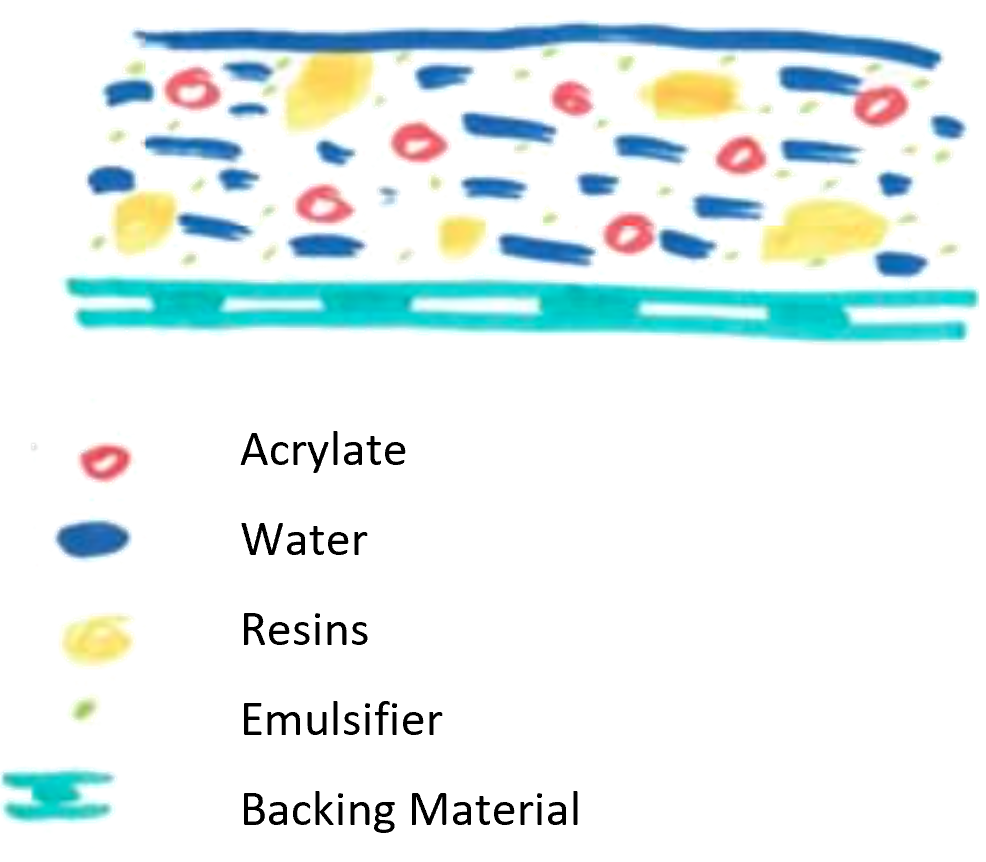 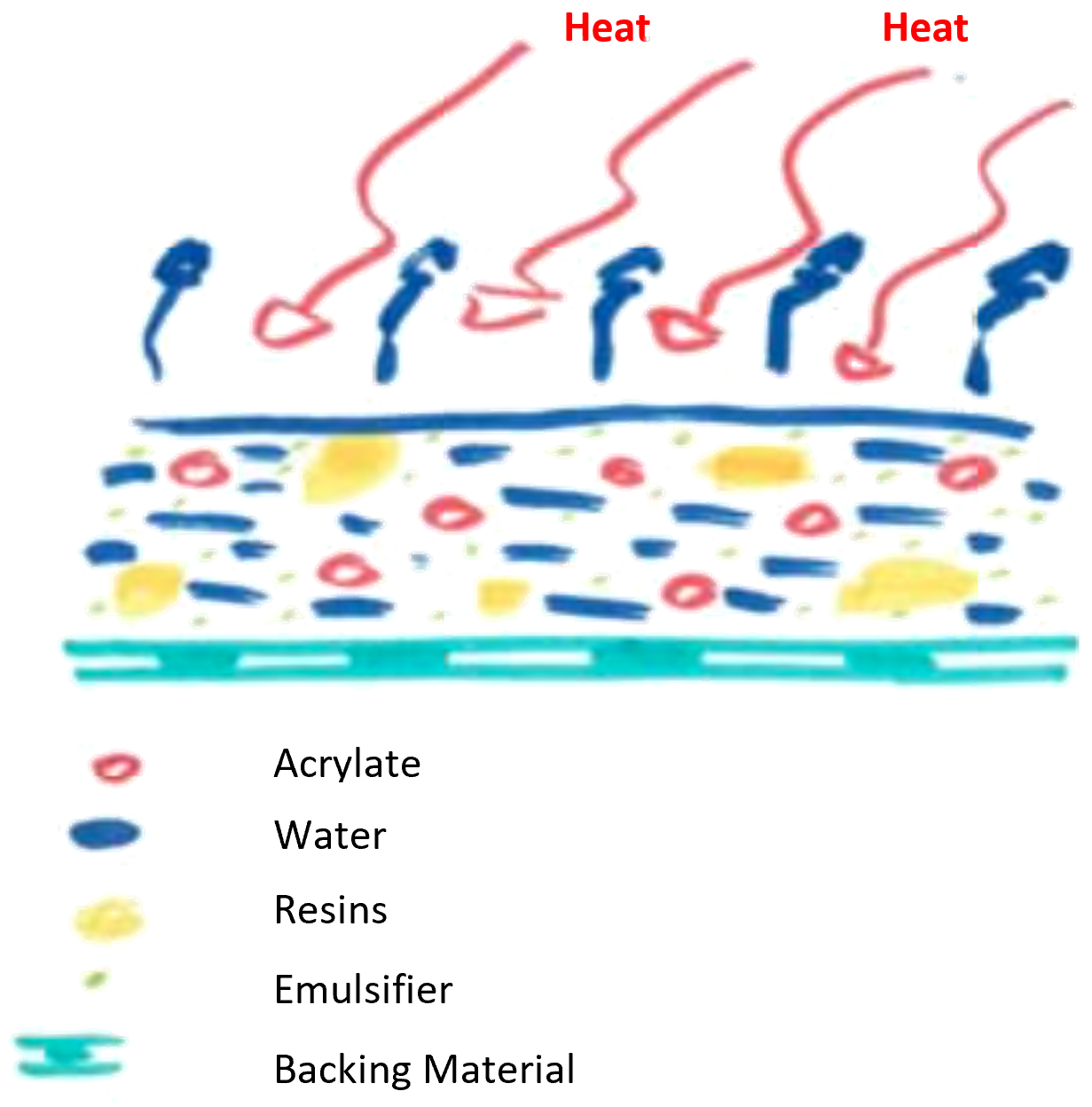 The water is then evaporated in long drying chambers later in the production process. 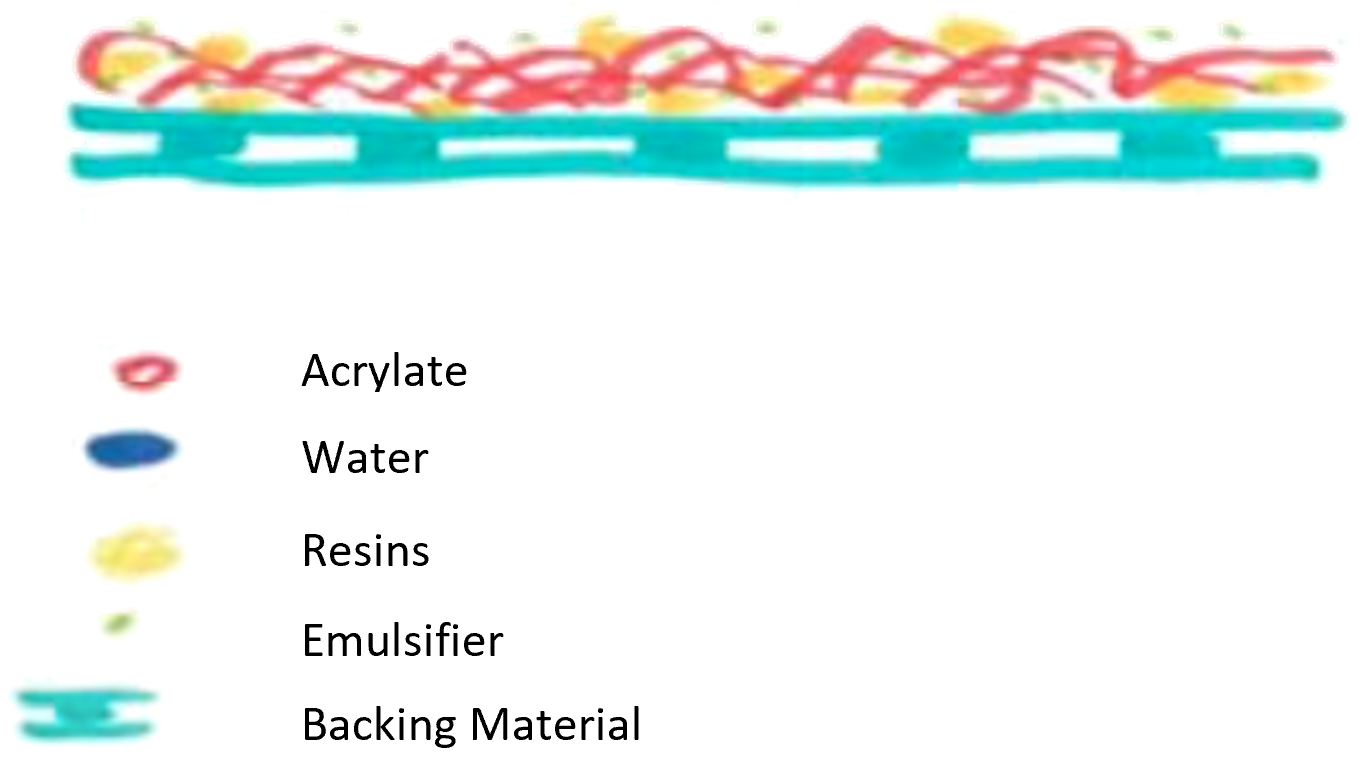 The dissolved acrylates bond with one another, form long chains of molecules and become  “sticky“ as a result. The emulsifiers remain in the adhesive film, but no longer serve any purpose. The manufacturing of a dispersion adhesive tape is typically a fast, simplified process.

A more exclusive group of adhesive tapes is manufactured using a solid-based adhesive containing pure acrylate. The manufacturing process is slower and more labour intensive than that required for acrylate dispersion adhesives. This type of acrylic tape, due to its robustness, has been utilised in the aeronautical and automobile industries for decades. 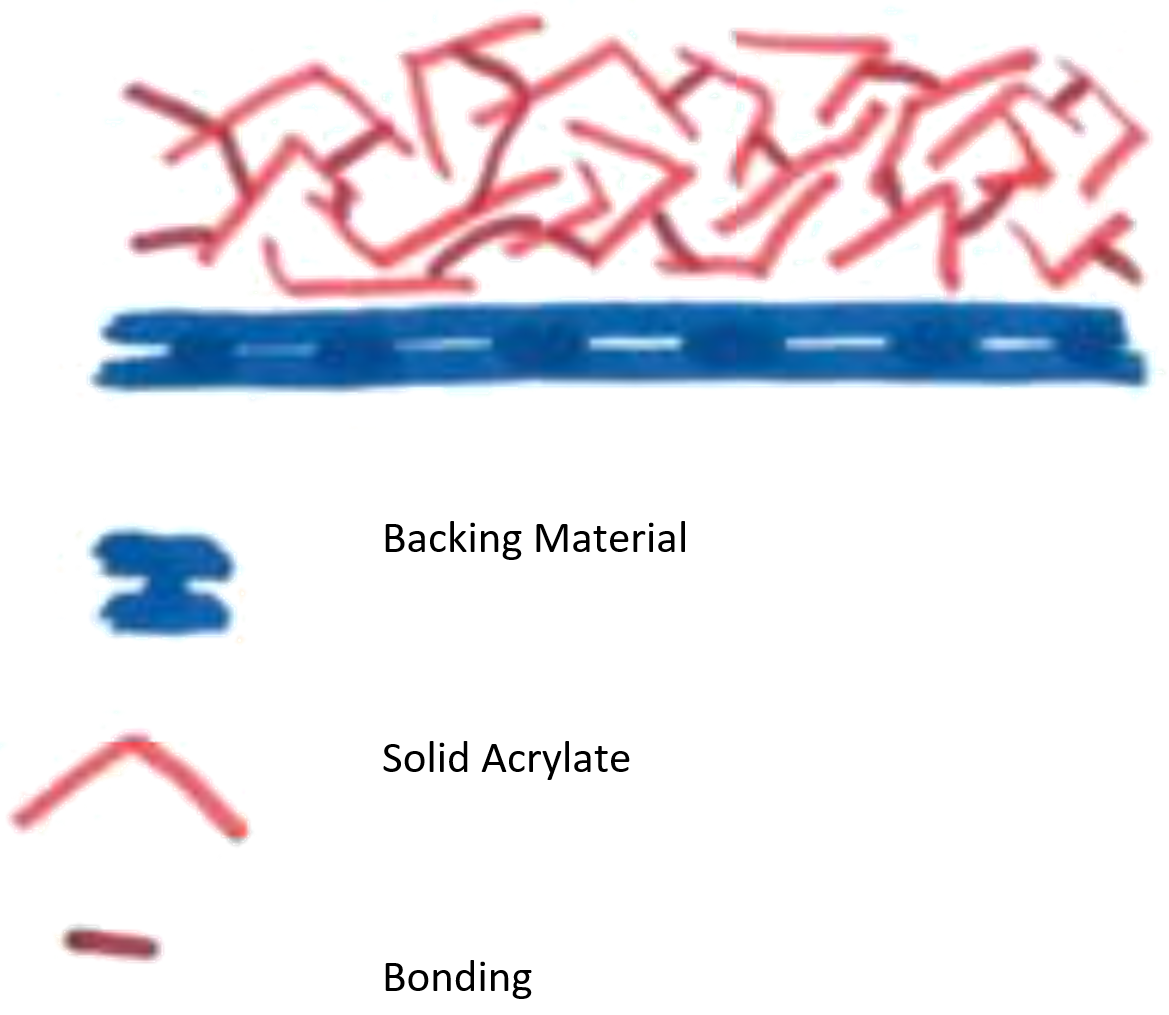 The Key differences between the two types of adhesive tape (Dispersion and Solid Acrylate) is the omission of the need for additional Resins when the tapes are manufactured in the Solid Acrylic adhesive process. In doing so the adhesive tape is at much less a risk of failing when exposed to higher / lower temperatures and humidity, impact of water and  slippage/ loss of adhesion over time.

There are two forces at play when considering adhesive joints: Adhesion; the force of holding the adhesive to a substrate and Cohesion; the adhesives ability to hold itself together.  Striking the correct balance between adhesion and cohesion makes for the ideal adhesive tape.

A similar principle of adhesion applies with the Gecko, which is able to walk upside-down to smooth surfaces such as panes of glass. This is made possible by the large number of very fine setae (hairs) on the feet of the Gecko, increasing the contact surface and thus facilitating sufficiently strong adhesive forces.

With these pressure activated solid acrylic adhesive tapes, the adhesive is "wetted" providing "the flow" to form strong clinging bonds at the molecular level –similar to what we witness in nature with geckos.

Put them under pressure

The crucial point of note from the above images is the importance of direct and pressurized contact between the adhesive and the substrates to which is being taped to / sealed.  The adhesive flows around these structures and claws to the surface like a squirrel on a tree or grips the surface like a sloth wrapped around a branch.

The increase of adhesion over time of a solid acrylic pressure activated tape is really what sets itself apart from the tackier dispersion based glues. The crucial point to note is that the solid acrylic based tapes bond to the substrates on a molecular level, penetrating much deeper into the substrate rather than relying on sticking to just the face of the substrate alone.  Adhesion alone however only tells half the story of an effective adhesive tape. 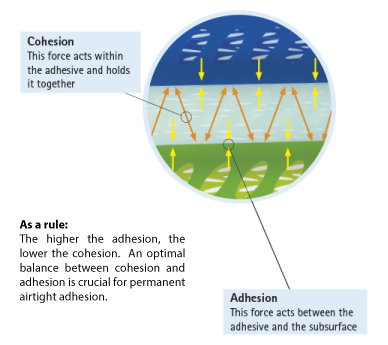 The Waiting Game:  The build-up of adhesive forces

Much of how we judge the suitability of airtightness tapes is down to how sticky we feel they are. The stickiness or lack thereof is typically decided by the simple finger or thumb test. Pressing a finger onto the face of the adhesive. The result?, Well it feels sticky, as it should do!

Although this initial tack will gave you an indication as to the stickiness of an adhesive tape, this really won’t tell you much, if anything, about how suitable the tape will be in holding an airtight seal even 3-4 months down the line and much less about how well things will remain stuck in 50+ years over the service life of a building.  To illustrate the importance of the longevity of an airtightness tape, pro clima commisioned an independent study by the University of Kassel.  This resulted in tests being carried out on three pro clima tapes (Tescon Vana, Tescon No.1, Uni Tape) that proved they provided a permanent airtight seal that would last 100 years. The dispersion glues discussed above can be identified as being aggressively sticky initially. A widely held fact however is that this initial tack is synonymous with cheaper, low grade adhesive tape. These tapes being commonly adopted as household tapes and the standard Duct tape.

Soft adhesives (as found in Dispersion glue tapes) perform better in the ‘finger adhesion’ test, as they are better able to wet the surface of the thumb. This can lead to problems in practical construction applications, as soft adhesives generally have low cohesion forces.

It can take some time before an adhesive has flowed into a subsurface fully and established a strong bond with it. Adhesive strength is generally built up over a period of hours. The reason that manufacturers recommend that their adhesive tapes should be pressed into place can be explained by the mechanisms described above: an adhesive must be brought into close contact with a subsurface to be able to flow around and surround it.

The photo above illustrates the increase in bonding strength over the course of one day. The initial adhesion – after 20 minutes - shown on the left is adequate for initial airtight adhesion to a substrate however the image on the right shows a significant increase in the adhesive bond over the course of 24 hours with a much more robust bond as the adhesive is given time to penetrate deeper into the adjoining substrate.

When we then compare this significant increase of adhesion with the two images below we see a real and distinct difference in the performance of the adhesive bonding over time from the dispersion adhesive tape (grey tape) to that of the solid acrylic tape (blue tape).  After 20 minutes this basic grey dispersion based tape gives an adequate initial tack.

What is most crucial however for adhesive tapes being used in construction is that this adhesion increases over time.

As can be seen after the 24 hours the tape offers no significant increase in adhesion can be seen peeling away quite easily from the face of the wooden substrate.

The dispersion based adhesive tape lacks any real cohesive strength and fails when put under stress – delaminating away from the face of the substrate as it doesn’t possess sufficient cohesive strength, its adhesive unable to penetrate deep enough into the adjoining material or resist the stress of movement.

The solid acrylic based glue (blue tape) on the other hand forms a much more robust bond.

In our next blog we will look in detail at the impact that on-site conditions can have on the performance of an adhesive tape.

Including the impact that the presence of water can have on durability of the adhesive to remain stuck for the life time of the building. 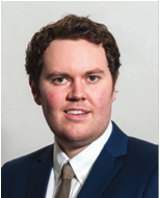