When it comes to property value, a number of factors are taken into consideration. Alongside location, size and type of property, energy efficiency is also an important factor when looking to increase your property’s value. This is due to the fact that an energy efficient home usually has a more comfortable living space, lower energy bills, and well insulated homes have better protection on the structure of the building. When looking to improve a property’s energy efficiency, older buildings present a challenge. Sustainability should be considered in every renovation or construction project, but for older building it’s especially important:

There are immediate basic steps you can take which are low risk and don’t involve serious expenditure:

These insulations are primarily natural, sustainable and hygroscopic, they are able to absorb and store moisture and to dry out again without being degraded in any way. Given the right conditions they will continue to perform indefinitely. Remember to pay particular attention to the attic hatch which should be both draught proofed as well as insulated.

The long term performance of these natural fibre insulations can be enhanced by the installation of an airtight vapour control layer (VCL) with a variable diffusion resistance (SD value). This should be installed up against the warm side of the insulation. All overlaps, edges and service penetrations should be sealed with Tescon No1 or Tescon Vana tape at overlaps and Orcon F adhesive used on perimeter walls. On a retrofit, historic or protected structure project this may not be practicable, as it will require removal and replacement of ceiling fabric.

Wall insulation will require some consideration, as older buildings and modern buildings often require very different remedial methods. Older walls (often pre 1919) tend to be single leaf – no cavity or separation, were built to be ‘breathable’, in other words they could absorb and store moisture from either or both sides. This moisture would evaporate naturally, often aided by its breathable lime render on either or both sides. This variable moisture level is also affected by ground water as these old walls didn’t have any damp-proof course.

Calsitherm Climate Board Calcium Silicate board

A word of warning!

If old masonry walls are stripped of their external render, whether it be the (possibly inappropriate) sand and cement, or the original lime render, this may cause more moisture problems than intended due to exposure of the wall surface to wind driven rain. Breathable external plasters are the optimum protective layer for stone and brick walls from the prevailing rain and wind.

Possible solutions for exposed stone or brick walls would be to apply a lime render to replace the original or to simply consider application of a colourless, breathable water and rain repellent such as BKK Eco. This is particularly important if internal insulation is applied to the internal face of external walls; it may be necessary to treat externally – especially in the case of single leaf brick walls which can be extremely absorbent. NOTE: It is imperative that the wall is not sealed with an impervious layer externally, such as a cement or sealing paint. Such finishes will likely lead to increased moisture levels within the wall in the longer term.

Diathonite Evolution lime based thermal plaster, or simply the application of a suitable lime render to protect the wall and to help control moisture levels.

Ensuring your building is airtight and windtight not only improves its energy efficiency, increases comfort and reduces heating costs, but is key in order to meet eco-buildings standards such as Passive House or nZEB. When combined with a robust ventilation strategy, making buildings airtight and wind tight achieves more pleasant, healthier places to be, as unwanted draughts are eliminated and thermal insulation is made fully effective.

The application of the plasterable Contega Solido SL tape around windows and door frames alone will make a sizeable contribution towards making most draughty homes more airtight. However, to improve the Building Energy Rating (BER) from perhaps a G rating up to a B rating is going to require a lot more than the application of a few fit for purpose airtightness tapes. It will require careful planning and costing. A good example of this is our featured Clane Retrofit project which was sympathetically restored from a G to an A2 energy rating!

If a plan for retrofit is drawn up, this should incorporate the principle of creating a complete airtight envelope wherein draughts will be excluded, heat can be retained and fresh air ventilation can be made continuous. Making a building airtight introduces control, thus making way for a healthier more comfortable environment while radically lowering energy demand. To bring a building from one century into another century will require an amount of joined-up thinking, planning and expenditure.

Ensuring that there are no opportunities for air leakage or draughts is very important, and a system of an Intelligent airtight vapour control membrane, such as Intello Plus, sealed with window tapes, sealants for joist ends, tapes to seal overlaps and other materials is required to ensure that the Intelligent airtight membrane can work to its full potential. The new Ecological Building Systems website is full of useful easily accessible information and as always can be backed up by our Technical Team both in Ireland and the UK.

Now that Building Efficiency Ratings are a compulsory requirement to complete all house sales and rental agreements, this has highlighted a home’s energy consumption in that a good rating can add substantially to the value of a home, possibly about 10%.

High energy consumption is also now often compared to the fuel consumption of a large car in that it is an ongoing burden which in turn makes a sale more difficult and less likely.

It seems fair to conclude that money spent on well researched energy upgrading of a family home has to be money well spent - the benefits will give a substantial return in improved living conditions, a drop in outgoings and the comfort of knowing that the sale value of the property has increased due to its having become a more attractive proposition because of its improved BER.

We recommend these links:

At Ecological Building Systems, we are passionate about climate-friendly building practices using natural materials. Contact our expert team today to discuss your needs. 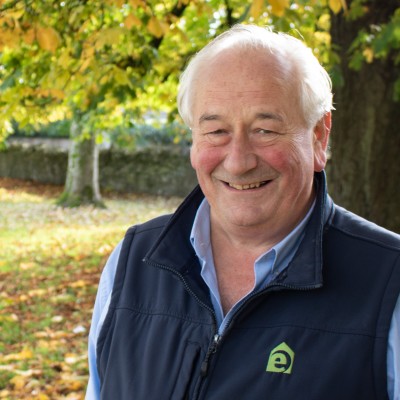 Peter has been with Ecological Building Systems for the past 15 years and is a certified Passive House Contractor. Having previously gained over 10 years’ experience as a project manager on new builds and significant conservation projects; Peter now delivers informative presentations to heritage groups and architectural practices around Ireland and is our specialist advisor in relation to the installation of Diasen products. Apart from his work on building conservation and retrofitting; Peter also provides direct site support where he gives builders and architects advice on achieving optimum air tightness and maximising thermal performance while minimising condensation risk.